Before the atom second was introduced timekeeping was based on measuring the length of day by astronomic measurements. The rotation speed of the Earth averaged over a long enough period of time resulted eventually in the number of oscillations between two hyper-fine states of the Caesium atom which was used in the atomic clock invented in 1955. As a result presently 9,192,631,770 counts between the ground states of Caesium define the second, see also [ref]

At the same time another problem occurred, namely that there are ‘users’ who want an atomic time system that runs with the rate of the atomic clock but that does not deviate more than a second from Earth rotation time. This time system is called UTC, and in order to maintain UTC we need leap seconds so that the difference between UT1 (Earth rotation time) and UTC (the coordinated universal time based on the atom clock) does not grow to more than 1 second. Tonight at 0:00 UTC (July 1st 2015) a leap second is introduced for this purpose, but the question is, do we really need this? Could we not live with atomic time, and still keep in pace with Earth rotation without introducing anomalous seconds. The answer to this question is yes, but it would call for a different definition of UTC.

To understand this concept I plot below the difference between UT1 (Earth rotation time) and TAI (the atomic clock). The difference between both time systems is shown in milliseconds; it shows a long periodic trend that can be well described by a polynomial function over the past 50 years, the second plot shows the difference between an optimal fitting parabolic trend function. The analysis shows that there is no difference larger than 1000 milliseconds (except in the early part) which would fulfill the requirement that a coordinated time, UTC, could also be constructed as a continuous function. 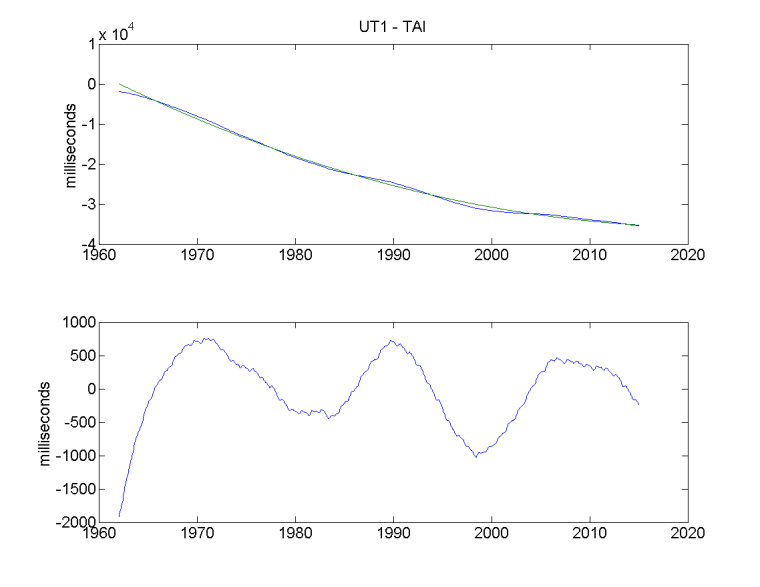 Eventually the definition of the atomic second is affected by the choice to count the number of oscillations between two ground states. The current length of the atomic second was ‘conceived’ by a committee who looked at a couple of years of data in the sixties and seventies when Earth rotation was slightly different compared to 2015. If you would re-calibrate the atomic second according to the parabolic function then we wouldn’t need the leap second. Another alternative would be to allow for a larger difference between UT1 and TAI, and to simply scale the atom second to a new value.

So the answer is, yes we could live without the leap second if 1) a suitable parabolic correction function was used, 2) or if the atomic second was re-scaled and larger differences were allowed.