How is the winter progressing, it became warmer, but we had a storm on the evening of the 22nd and the night of the 23rd. The lower right graph shows the pump actions (blue) and derived from the the estimated hourly rainfall. 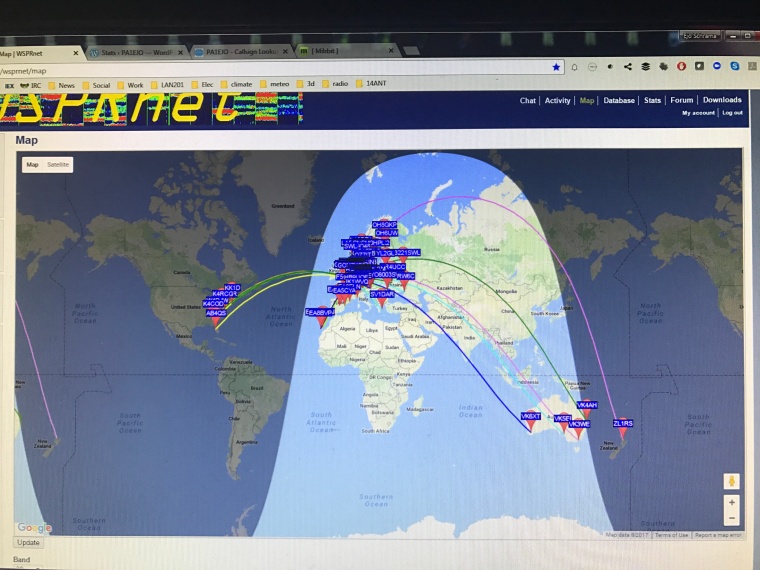 Popularity of four bands over the years, I compiled it from the spots counts I found on the website. When 20m gets a lot of spots, then 40m is less popular and the other way around. Percentages are on the y-axis.

This is the slightly smoothed solar flux (F10.7) over the same period. I would expect the HF propagation to behave like F10.7, but it should also be noticed that WSPR became more popular over the years.

Feb 1, 1953 our province Zeeland was flooded after a storm, the area was cut off the rest of the world and a handful of radio amateurs provided assistance to call in help. The first image shows Yermolai, currently his call sign is PD0TZ, standing next to the transmitter operated by his grandfather PA0TZ. The radio was homemade as most equipment was in those days. The next image shows what you would need today, on annual events of the storm there is a station in the air and radio operations are demonstrated in the watersnoodramp museum, for details see http://buff.ly/2kcl2ul The four concrete blocks shown on that website are the original caissons used to repair the damage to the sea wall caused by the storm in 1953, currently they serve as a museum. http://buff.ly/2kcyRcb